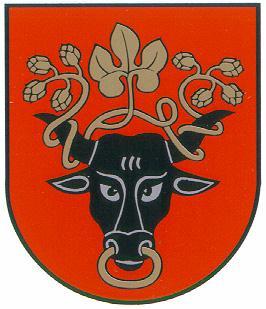 Pasvalys was already mentioned in the 13th century, but received city rights only in 1950. The arms were designed in 1970 and showed a bull's head and a branch of hops. The bull's head was derived from the arms of the town's founder, Albertas Taboras (whose arms showed a donkey, not a bull); the hops symbolise the beer making tradition of the area. The arms were already abolished in the same year.