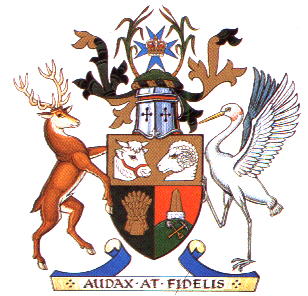 Arms : Per fesse, the Chief Or, the Base per pale Sable and Gules, in chief a Bull's head couped in profile muzzled, and a Merino Ram's head respecting each other proper, the dexter Base charged with a Garb of the first, and in the sinister Base on a Mount a Pile of Quartz, issuant therefrom a Gold Pyramid, in front of the Mount a Spade surmounted by a Pick saltire-wise all proper.
Crest : On a Wreath of the Colours, a Mount, thereon a Maltese Cross Azure, surmounted with the Imperial Crown, between two Sugar Canes proper.
Motto: 'Audax et Fidelis'.

The basic arms were granted in 1893, and are thus among the oldest in Australia. The supporters were added in 1977, at the Silver Jubilee of Queen Elizabeth II.

The main industries in the state are shown on the arms; a bull and sheep as well as the sheaf of wheat represent the agriculture. The column of gold rising from a heap of quartz show the importance of the mining industry. The brolga (bird) is the state's official bird and represents the native population. The red deer represents the old world. The badge on top shows the Maltese cross and the royal crown, both symbolising allegiance to the Queen. The cross was one of the symbols proposed as a State badge in 1876. The sugar cane's also represent a major agricultural crop.

The motto means Bold, aye, and faithful too !.