From Heraldry of the World
Your site history : Queenstown (Eastern Cape)
Jump to navigation Jump to search 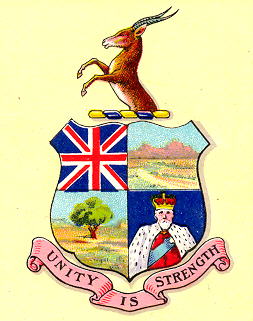 The town was named after Queen Victoria, which no doubt explains the Union Jack. Presumably the king in the fourth quarter is either Edward VII or George V. The motto is the same as that of the Union of South Africa, but in English.