From Heraldry of the World
Your site history : Quispamsis
Jump to navigation Jump to search 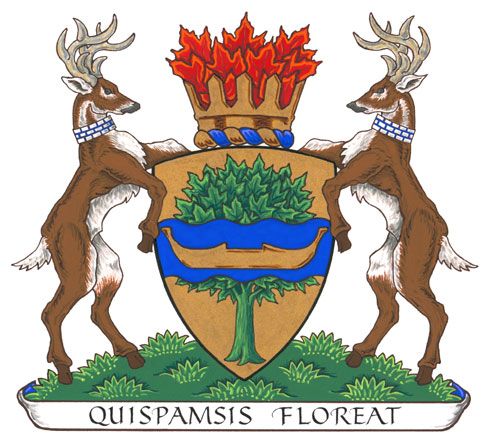 Arms: Or a maple tree Vert, overall a fess wavy Azure charged with a gondola Or
Crest: Issuant from a coronet vallary Or a spray of maple leaves Gules
Supporters: Two white-tailed deer proper each gorged with a circlet Argent masoned Azure and standing on a grassy mount Vert
Motto: QUISPAMSIS FLOREAT

The colour of the shield represents the sunlight that is the life-giving force to all. The tree represents natural vegetation of the area. The wave alludes to the name Quispamsis, meaning “little lake” in the Maliseet language, representing Ritchie Lake. The wave also represents the Kennebecasis River which has been the major influence in the region for the transportation of goods and lumber as well as modern recreation. The gondola is a raft that was used in the logging days on the river and carried passengers, goods and people. This mode of transport gave its name to Gondola Point, one of the component municipalities that merged to form the new town of Quispamsis.

The maple leaves in the crest identify the municipality as Canadian. The crown vallary presents an image of both town and a fenced area to be appreciated.

The deer represent the province of New Brunswick which also has such supporters. Each is differenced from other such supporters by the masoned circlet; representing the idea of a town. In addition, this circlet can allude to the portion of the Local Service District of Wells that was also merged to form the new town. The grassy mound represents the verdant area.

The motto means “May Quispamsis flourish”. 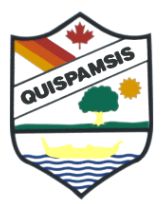