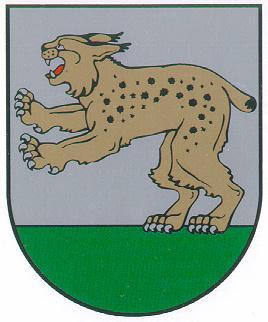 The arms were officially granted at the same time as the city rights, on March 20, 1792, by Stanislaus Augustus ruler of Lithuania and Poland.

The meaning of the symbol is not known, perhaps it was connected with the local fauna. The arms were used until 1831.

On April 6, 1845 Emperor Nicholas I granted new arms, showing in the upper half the obelisk of Kaunas province, and in the lower half two crossed cornicopiae, or horns of plenty. The latter were symbols of the agriculture in the area.

In the early 20th century the lynx was used unofficially, only after the independence, the lynx was officially restored on October 25, 1989.