From Heraldry of the World
Your site history : Royal London Hospital
Jump to navigation Jump to search 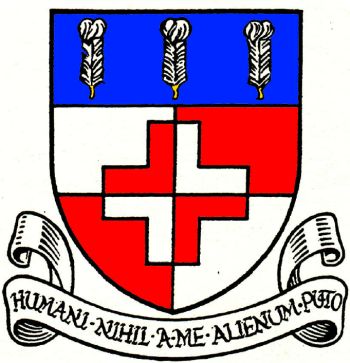 Arms : Quarterly argent and gules, a cross couped counterchanged; on a chief azure three ostrich feathers of the first quilled Or.
Motto: Humani nihil a me alienum puto.

The arms were officially granted on November 25, 1927.

The three ostrich feathers in chief represent the "Feathers Tavern" in Cheapside, London, in which the founders of the hospital met in 1740 to discuss their proposals for a voluntary hospital.

The red cross on a white background is common to many medical institutions, but coloured to emphasize the "L" for "London". Red and silver are also the colours of London.

The motto is an abbreviated version of the initial motto chosen for the hospital by its founders - "Homo sum, humani nihil a me alienum puto", which is a quotation from the Roman playwright Terence, meaning "I am a man, and I think nothing human is alien to me".

The motto was placed in the school by one of the founders, William Blizard, 'in order that the students should have constantly before us an admonition to Humanity drawn from a reflection of our own wants'