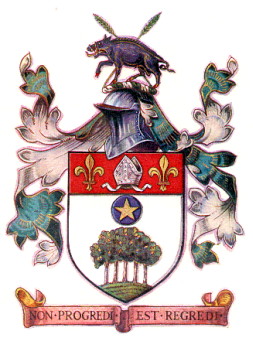 Arms : Argent on a Mount in base Vert a Hurst of Oak Trees fructed proper in chief a Hurt charged with a Mullet Or a Chief Gules thereon a Mitre of the first between two Fleurs-de-Lys of the third.
Crest : On a Wreath or the Colours in front of two Ears of Rye slipped in saltire proper a Boar passant Sable armed and unguled.
Motto: 'NON PROGREDI EST REGREDI' - Not to go forward is to go backward.

The hurst of trees with a representation of the Pole Star above are a play on the name Northwood. The mitre and fleurs-de-lys refer to the Abbey of Bec Herlewin in Normandy, to whom the Lordship of Ruislip was granted, where there was a cell of the Order. The Manor was later seized by Henry V and granted as part of the endowment of King's College, Cambridge. The Abbey and the College were dedicated to St. Mary, one of whose symbols is a fleur-de-lys.

The 'rye slips' are a play on the name Ruislip. The wild boar shows that the Lordship was an ancient one, granted when the land was forest roamed by wild boars.