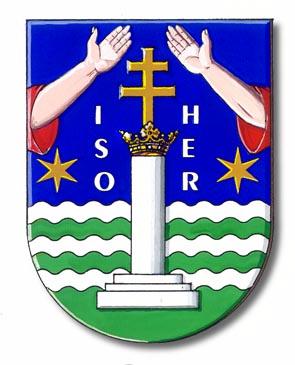 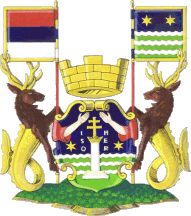 The three lines represents three rivulets that flow around Ruma. The stars represent the military credit of citizens in the war against Turkey. The letters read: IN HOC SIGNO EVADET OPPIDUM RUMA (With this sign the Town Ruma has developed).

According to another mail I received the shield historically should be red, the cross silver and the two arms were not the part of the shield, but supported a coronet above the shield. On the altar, there was no crown, but a green wreath. The stars were silver mullets, not stars.

Literature : Image and information send to me by Dragomir Acovic and Siniša Živanovic