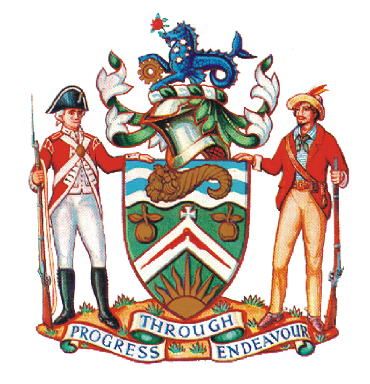 The arms display upon a green field, so tinctured in allusion to the rural aspect of the district, a white or silver chevron in reference to Ryde's residential area. The chevron is charged with a pair of dividers signifying "planning in general" and alluding to "Ryde Council's unique housing scheme" and is adorned at its apex with a cross patee symbolising Christianity.
Above the chevron are depicted two golden apples representing the orchards and the wealth derived therefrom as well as being a direct reference to the Granny Smith Apple of local fame, whilst below the chevron appears a rising sun, in play upon the original name of the district "Eastern Farms".
In the upper part of the shield the vital and important waterways of Ryde are heraldically represented by the blue and white wavy bars and thereon is placed a golden cornucopia symbolising the district's produce and its movement by water.

The principal charge in the crest is a sea horse taken from the Crest of Ryde, Isle of Wight (UK). To effect the requisite heraldic difference it is displayed azure and is charged on its shoulder with a representation of the Constellation of the Southern Cross, an emblem associated with Australasia. In its mouth is placed a slip of the Waratah flower as used in the Mayoral chain and supported between its legs is a golden cog-wheel referring to industry and its resultant wealth.

Supporters: On the dexter side is a private of the Royal Marines and on the sinister side an early colonial settler of the late eighteenth century both habited proper. These were chosen to indicate that the first settlers of the Ryde district were ex-servicemen and to the transition of the servicemen to the peaceful pursuit of the pioneer.

The whole achievement rests upon a grassy mound upon which is set in traditional heraldic fashion a scroll bearing the motto (in English) Progress Through Endeavour.