From Heraldry of the World
Your site history : Ryerson Polytechnic University
Jump to navigation Jump to search 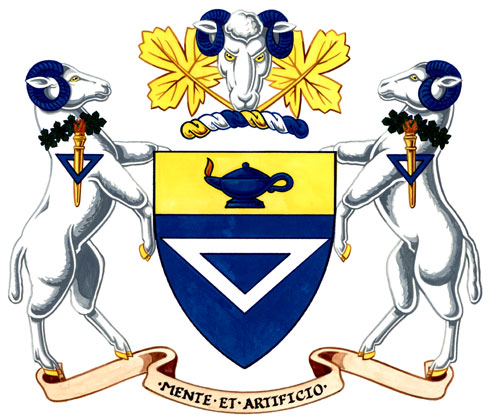 The lamp is the symbol of intelligence giving forth the flame of the spirit within. It is light in the darkness. It is inspiration.

The set square is the symbol of artifact, construction and building. It represents the practical and material.

Aries, the Ram, rising in the vernal (spring) equinox, and is the symbol of the creative impulse through which the potential becomes the actual. In Astrology, it governs the head and the brain. The torch is the symbol of light, education, liberty and increasing knowledge.

The colours are azure (blue), signifying loyalty and truth, and or (gold) signifying generosity and elevation of the Mind

The motto, “Mente et Artificio” translates from Latin as “With Mind and Hand”.

Literature : Image and blazon from http://www.gg.ca; background by Geoffrey Lee.