From Heraldry of the World
Your site history : South Melbourne
Jump to navigation Jump to search 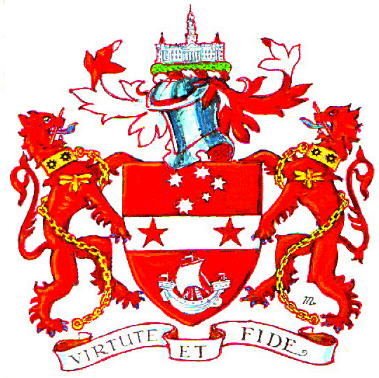 Arms : Gules, on a Fess between in chief a repre­ sentation of the Constellation of the Southern Cross, with five Stars, and in base a Lymphad, sail set, Pennon and Flags flying, Argent, two Mullets Gules.
Crest : On a Wreath of the Colours, on a Mount Vert, a representation of the Town Hall of the City of South Melbourne proper.
Supporters : On either side a Lion Gules, charged on the shoulder with a Bee volant, and gorged with a Collar with chain reflexed over the back Or, on the Collar two Cog Wheels Sable, and in the mouth a Pencil proper.
Motto: 'Virtute et Fide'.

The shield is based on earlier arms assumed by Melbourne, with a colour change from black and gold to red and white, the colors of both the city and its former football team 'the Swans'. The Southern Cross is drawn from the State arms and flag badge, its position above the white bar indicating that the City is south of the capital, Melbourne. The ship presents the sea, southern boundary of the municipality, with its facilities for swimming and water sports. The crest represents Emerald Hill, the original name of the municipality and the site of the Town Hall. The two lions also come from the Melbourne arms, though with a change in color and the cogwheels for industry of the collar. The pencils refer to the Victorian Arts Centre, northern gateway to the City, and the honey bees to service, particularly social service. The motto was first used on the city seal of 1883.