From Heraldry of the World
Your site history : Spalding RDC
Jump to navigation Jump to search 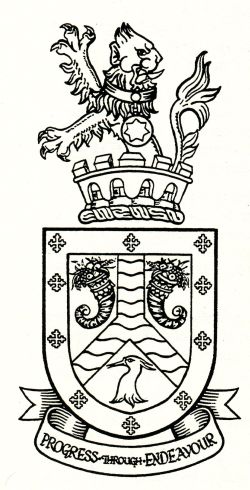 Arms : Or, a cross pall reversed barry wavy argent and azure between in chief two cornucopiae addorsed gules and in base a heron's head erased proper; all within a bordure of the third charged with ten cross-crosslets of the field.
Crest : On a wreath of the colours, Issuant from the battlements of a tower gules, a demi lion reguardant argent gorged with a collar sable, pendent therefrom by a chain Or a hurt charged with a mullet of seven points gold, the collar charged with a bezant.
Motto: Progress through endeavour