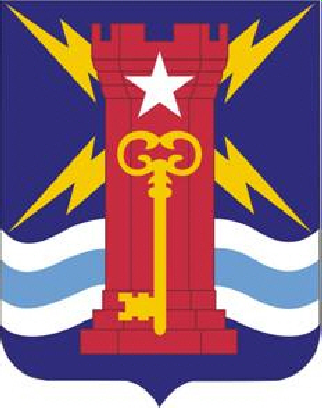 Shield: Azure, in chief two lightning bolts saltirewise Or, in base a bar wavy Argent bearing a barrulet Celeste, overall a tower Gules charged with a key ward to base of the second below a mullet of the third.
Crest: None.
Motto: TRAINED AND READY.

The dark blue gives emphasis to the battalion’s support provided to the Infantry Division as well as the other battalions within the brigade. Gold is emblematic of excellence and high achievement and red is the color of valor and sacrifice. The castle tower, adapted from the Corps of Engineer branch insignia, represents the Engineer branch and the mobility and survivability capabilities that the battalion provides to the brigade. The lightning bolts symbolize the communications and electronic warfare elements of the unit’s mission and denote the timely support and modern communications capabilities of the Signal branch. The key refers to Military Intelligence and the critical nature of the mission they provide to support the commander’s decision-making process that is crucial to victory on the battlefield. The star represents the command and control capability that the unit provides to the brigade. The wavy bars symbolize water and underscore the unit’s ability to deploy to any theater of war in a timely manner. The Coat of Arms was approved 31 October 2005.

Literature: The Institute of Heraldry.