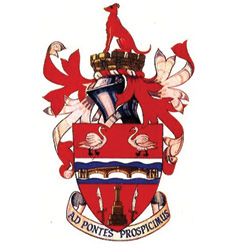 Arms : Gules on a Fesse barry wavy of four Argent and Azure between in Chief two Swans respectant proper and in base a representation of London Stone Or between two Seaxes blades upwards and outwards of the second hilted and pommelled a representation of the Staines Bridge Gold.
Crest : On a Wreath of the Colours upon the Battlements of a Tower Or a Greyhound sejant Gules.
Motto : 'AD PONTES PROSPICIMUS' - At the bridges we look forward.