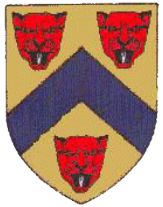 The chevron symbolises the River Avon and the three red leopard heads are taken from the Royal Coat of Arms. They stand for Richard the Lionheart who gave the original charter in 1196.