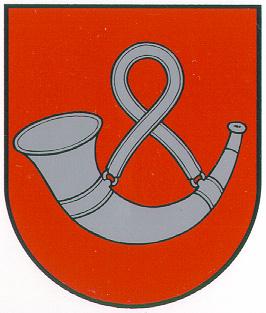 Tauragė received city rights in 1932, and its first arms were designed in 1969.

The arms showed a hunting horn, made of a horn of a wild ox, being a canting element (tauras means wild ox), as well as a symbol for the many battles in the area. It was abolished in 1970.

The arms were slightly changed and officially restored on March 3, 1997.