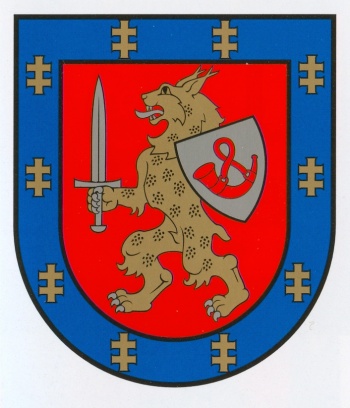 The origin of Tauragė county is 1918, when the occupational German regime established the Tauragė county (Bezirk), depending to the Lithuania province of Oberost.

The arms shows on red field standing golden lynx with silver sword and shield, on shield the red horn.
The lynx is the symbol of vigilance and foresight. Those features are needed for the border land, both for the trade and for the care against the unwished influences. Also the lynx remembers that Taurage land depended to the Raseiniai district once.

The horn refers to the arms of Tauragė city, the administrative center of county.