From Heraldry of the World
Your site history : Teesside
Jump to navigation Jump to search 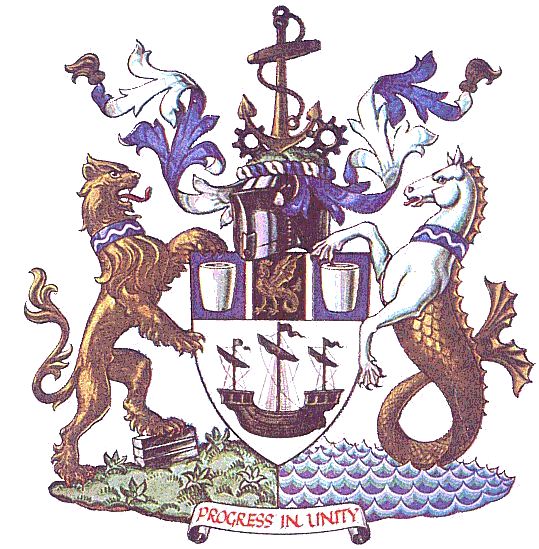 Arms : Argent an ancient Ship sails furled pennons flying Sable on a Chief Azure on a Pale Sable fimbriated and between two Crucibles Argent a Basilisk Or.
Crest : On a Wreath Argent and Azure on a grassy Mount proper an Anchor Or between two Cogwheels Sable.
Supporters : On the dexter side a Lion Or resting the interior hind paw on three Ingots of Steel proper and on the sinister side a Seahorse Argent scales dorsal fin and tail Or each collared Azure thereon a Barrulet wavy Argent the whole upon a Compartment per pale of a grassy Mount and Waves of the Sea proper

The ancient ship represents the area's long association with shipping - both for trade and building. The two crucibles symbolise the steel industry and the two white vertical rails between them are a reminder that the first passenger railway in the world had its terminus at Stockton. Between the rails is a basilisk, whose stare turned people to stone, representing Teesside's vast modern chemical industry.

The cogwheels recognise Teesside's engineering industries and the anchor is another reference to the area's maritime associations.

There is another allusion to steel in the three ingots on which the lion rests a paw. The seahorse portrays the sea trade of the Tees. The whole rests on a grassy mount and waves of the sea.