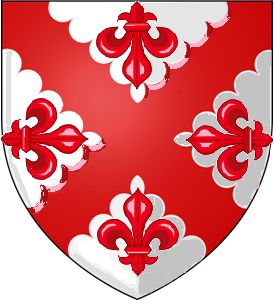 The arms have not officially been granted.

The arms have been used since early in the 19th century, they seem to have been copied from arms found on the ancient Portreeve's staff or pole (missing since 1912, but there are pictures of it). The arms on the Portreeve's staff or pole are most likely the arms of the treasurer of the Bishop of Exeter -Gules, a Saltire engrailed between four Leopards' heads or. Why the leopard's heads turned into fleur-de-lis is not known.