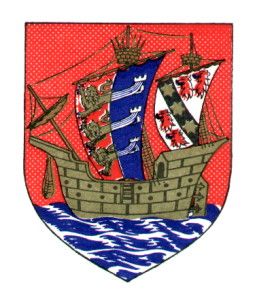 Gules in base Waves of the Sea proper and thereon a Ship of three masts Or the sail on the foremast furled the mainsail per pale Gules and Azure thereon three demi Lions passant guardant Or conjoined to as many Hulks of Ships also Argent the mizzen charged with the Arms Argent on a Bend Sable between four Lions' Heads erased Gules three Mullets of six points Or.

The arms were officially described during the Visitations of 1574 and in colour in 1619.

The arms on the mainsail are those of the Cinque Ports (but with the ships' hulls coloured silver), Tenterden being a member of the Port of Rye. A ship bearing these arms on its sail and a banner of St George at the stem stands on the fifteenth-century aeal of Tenterden. On the reverse of the same seal, beneath a figure of St Mildred, the Patron of the town, is a shield bearing the arms which appear on the mizzen of the ship in the town arms. These are the arms of the Pillesden or Pitlesden family, one of whom was the first Bailiff of Tenterden.