From Heraldry of the World
Your site history : Texas State Guard
Jump to navigation Jump to search 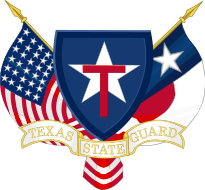 The mission of the Texas State Guard (TXSG) is to provide mission-ready military forces to assist state and local authorities in times of state emergencies, to conduct homeland security and mission support activities under the umbrella of Defense Support to Civil Authorities, and to augment the Texas Army National Guard and Texas Air National Guard as required.

Headquartered at Camp Mabry in Austin, Texas, the TXSG functions as an organized state militia under the authority of Title 32 of the U.S. Code and Chapter 431 of the Texas Government Code. The Governor of Texas has sole control over the Texas State Guard, because it is not subject to federal activation."