The Institute of Heraldry, US Army

From Heraldry of the World
Your site history : The Institute of Heraldry, US Army
Jump to navigation Jump to search

THE INSTITUTE OF HERALDRY, US ARMY 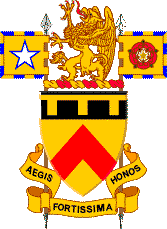 Shield: Or a chevron Gules, on a chief Sable a label of the first. Crest: On a wreath Or and Gules, a griffin rampant of the first. Banners: Flanking the crest two banners, the staffs of light brown with silver finials and ferrules passing behind the shield and extending below the motto scroll, the dexter banner Or bordered compony of the like and Azure, charged with a mullet of the last voided Argent; the sinister banner Or bordered compony of the like and Gules, charged with a tudor rose barbed and seeded Vert. Scroll: Or lined Sable with lettering of the last. Motto: Aegis Fortissima Honos (Honor is the strongest shield).

Shield: The red chevron refers to the military which supports and is under the civil jurisdiction of the Federal Government represented by the label, the three points alluding to the Executive, Legislative and Judicial Branches. The Label is also indicative of The Institute of Heraldry being the direct descendant (offspring) of the heraldic activity initially created in 1919 under the General Staff, United States Army, in 1924 transferred to the Quartermaster General, and in 1962 reassigned to the Adjutant General. Furthermore, the label alludes to The Institute of Heraldry as being the only heraldic activity in the United States which is officially comparable to the heraldic institutions of the old world and which continues the art and science of heraldry under its long established traditional and historic rules.

Crest: The griffin, a fabulous animal half eagle and half lion, is symbolic of wisdom and inspiration. The role of the griffin as guardian of treasure is symbolic of the Institute’s singular responsibility to safeguard heraldic art of the Federal Government. The eagle also alludes to the United States and the lion to Great Britain, the major source of our language, laws and heraldic knowledge.

Banners: The large white star (heraldic mullet) edged with blue symbolizes all the states which comprise the United States and was suggested by the union of the United States flag. The red and white (tudor) heraldic rose alludes to the first and permanent colonization of America by the English under the Tudors.

Colors: Gold is symbolic of achievement and honor, red of zeal, and black of jurisprudence and knowledge.

The Coat of Arms was granted by the Secretary of the Army Stanley Resor 27 June 1966.