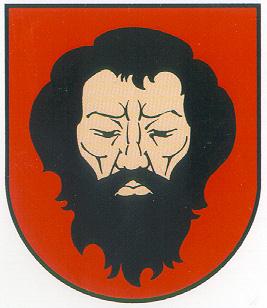 Trakai was one of Lithuania's most important cities during the 13-16th century. As Trakai was completely destroyed, it is not sure when the city rights were granted, most likely in the late 14th century. The oldest known seal of the city dates from 1491 and shows only the head of St. John Baptist, the patron saint of Trakai. The oldest seals showed the head facing the viewer, later 18th century seals, showed the face en profil.

As this face was no longer recognised as that of St. John, the arms were described in the early 19th century as the head of an unknown duke. In 1845 the city received new arms, showing a castle gate and some sabres. This composition was used until well in the 20th century.

The present arms are based on the oldest seals and show the head facing the viewer again. The arms were officially granted on January 23, 1996.