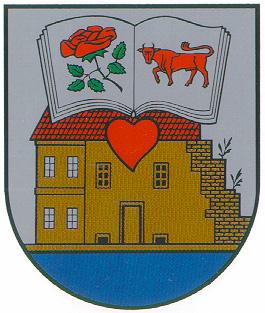 Ukmerge, then called Vilkmerge (the city was renamed after the first world war), received city rights on May 22, 1792. On the same day the arms were granted. The arms were applied for by the local townspeople and were rather complicated. The arms showed a house 'rising out of ruins' with a heart and a book. On the book were a rose and the text 'To a friend' on the one side, and a bull with the King's emblem and the text 'To the King'. Above these on both pages the text 'Eternal Gratitude'.

The composition may be symbolic for the political situation at the time. The country was ruined and nearly destroyed at the time, and was struggling to recover. The book probably symbolises the city rights. The bull was the symbol of the Poniatowski family. The city at the time was governed by Stanislaus Augustus Poniatowski, King of Poland and Lithuania. The origin of the rose is not known. The total text, Eternal gratitude to a friend, to the King, simply shows the gratitude of the people towards the King.

The meaning of the heart is not known either, but many possible explanations have been given. It could represent God's love, Joy or Harmony or several other meanings.

The composition was not really placed in a shield, but more like a seal. The house was shown very naturally, with branches coming through the windows and around it. The emblem survived until 1845.

On April 6, 1845 Russian Emperor Nicholas I granted the district and city new arms. The upper part showed the provincial arms, the obelisk of Kaunas. The lower part showed a star composed of three bundles of flax.

During Soviet rule the use of arms was abandoned. In 1970 the city tried to restore the old arms, but this was immediately abolished. After the independence the old arms were restored in a more heraldic and modern composition. These arms were granted on May 27, 1992.