From Heraldry of the World
Your site history : Victoria (Canada)
Jump to navigation Jump to search 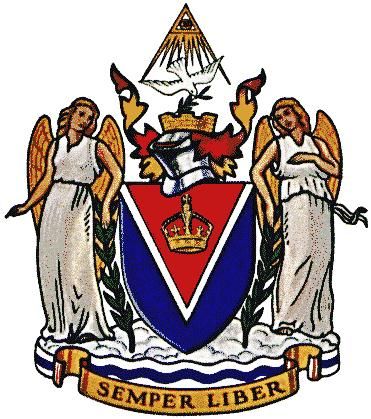 Arms : Azure on a pile Argent another Gules charged with the Royal Crown proper.
Crest: Descending upon a mural crown Or a dove wings expanded in the beak a sprig of olive proper, the whole ensigned of an eye within a triangle the base eradiated downwards Or.
Supporters: On either side an angel proper vested Argent winged Or supporting by the interior hand a branch of laurel Vert the whole upon a compartment of clouds proper the base environed of a riband Azure and Argent.
Motto: SEMPER LIBER

The centre of the design is a blue shield with a wedge-shaped section of white placed upon it, the point of the wedge towards the base. Upon this white wedge or "pile" as it is termed in heraldry, is placed another one slightly smaller, in scarlet. The overall effect is a white V separating the two colour areas of blue and red, thus creating a cypher for the name Victoria. Starting from the point in base and radiating upward and outward this white V also suggests the growth of the City. The scarlet wedge-shaped upper section represents the peninsula where the City of Victoria is located jutting out into the blue sea, the white V suggesting the surfy coastline. The "Tudor" Crown displayed on the scarlet area pays honor to and commemorates queen Victoria after whom the City was named. The shield is flanked by emblematic Angel figures representing the twin cities of Colonization on the left and Civilization on the right. Each supports with the inner hand, a branch of laurel as a symbol of honor and form of tribute to those with municipal public service to their credit. The All-seeing eye above is the emblem of the Trinity and suggestive of our constant dependence for the blessings of life upon the bounty of the Deity; the dove with the olive branch symbolizes hope and peace; and the gold Mural Crown is a symbol of municipal authority. Together, the eye, dove and crown form the crest. The mantling flowing from the top of the helmet indicates the municipal colours. Gold and Scarlet (the Royal Colours, another reference to Queen Victoria). The compartment upon which the shield and supporters rest is of Clouds as on the Seal, while the light blue and white wavy bands along the front edge of the Clouds represent water and indicate Victoria's insular position. The City's motto, "Semper Liber" - Always Free - is borne on a scroll at the base of the composition and suggests the Free Port system in Victoria's experience and civil institutions.