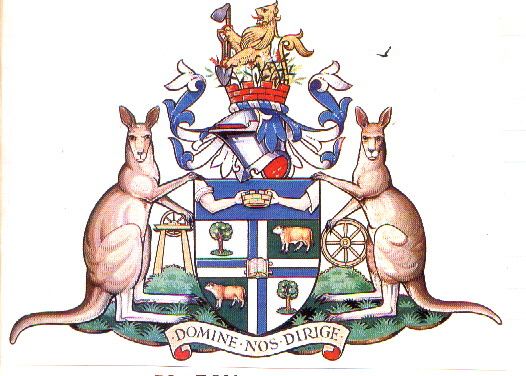 The first and fourth quarters denote the orcharding industry, which flourished in the northern sections of the municipality from the 1880's. Cattle were introduced in 1839, and the Jersey breed of dairy cattle in the 1880's resulting in a profitable dairy industry until the 1914-18 War.
The book represents culture and learning, facilitated by scools, libraries and other cultural activities. The blue and white Cross alludes to Christianity and the importance of the Churches in the life of the community from earliest days. The hands holding the mural crown symbolize the residential nature of the City and the involvement of its citizens in local government and community affairs.

On the crest the mural crown denotes municipal affairs while the Melaleuca is particularly common in the district. The lion, refers to close links to Britain and was Waverley's former emblem, while the spade and canterbury hoe denote the importance of market gardens in the southern areas from the early 20th Century until recent years.

The kangaroos were also features of the former emblem of the municipality, while the hillocks depict two local landmarks: Mount Waverley where gold was discovered in 1896, and was mined sporadically for decades, and Wheeler's Hill, named after the Wheeler brothers, early pioneer leaseholders in the district. The wheel also refers to the origins of local government in the establishment of the Oakleigh and Mulgrave Road District in 1857 to collect tolls and maintain the roads, which were a vital link for early farmers to the Melbourne Markets.