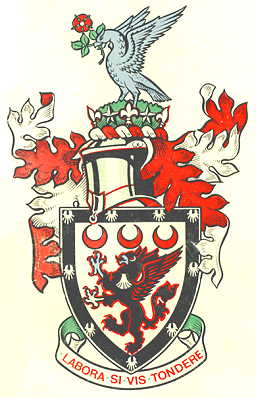 Arms : Argent a Griffin segreant Sable the beak and forelegs Or charged on the shoulder with an Escallop of the field in chief three Crescents Gules all within a Bordure of the second charged with eleven Ermine Spots also of the Field.
Crest : On a Wreath Argent and Gules within a Circlet composed of four Fleurs-de-Lys Argent and as many Mullets Sable alternately a Mount Vert thereon an Eagle rising neck embowed Or in the beak a Rose Gules barbed seeded stalked leaved and slipped proper.
Motto: 'LABORA SI VIS TONDERE' - Work if you would reap

The arms perpetu­ates the history of the parishes of this Rural District by reference to their old manorial families. The griffin comes from the arms of the Bold family of Bold and the crescent comes from the Ogles of Whiston. The Eagle in the crest refers to the Stanleys and it holds in its beak the Red rose of Lancashire.