From Heraldry of the World
Your site history : XIII Corps, US Army
Jump to navigation Jump to search 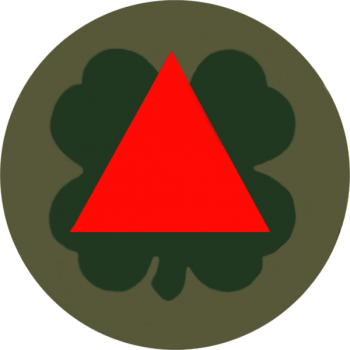 On an olive drab disc 2 1/4 (5.72 cm) inches in diameter a green four leaf clover stem down displaying a red triangle point up.

The four leaf clover is for good luck and as displayed the four leaves make an "I". The three states in the Corps Area, Pennsylvania, Maryland and Virginia, are represented by the triangle and as the original white population of the three was English the triangle is made red. The three sides of the triangle together with the green "X" make up the number "13".