From Heraldry of the World
Your site history : Gdańsk
Jump to navigation Jump to search 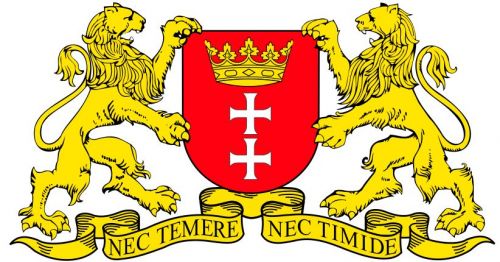 Gdansk has a complicated history. The city was founded in 997 and became a possession of the Teutonic Order in 1308. It received (German) city rights in 1343, but the oldest seal dates from the 13th century and reads civitatis, indicating that the town may have received city rights before 1308.

In 1452 the city became Polish. Later the city became Prussian. From 1807-1814 it was a separate state, but ruled by France. In 1814 the city again became Prussian. After the creation of a unified Germany, it became German. In 1919 the city and surrounding area formed an independent state (Freie Stadt Danzig), based on the former cities Danzig and Zoppot as well as the counties Danziger Höhe, Danziger Niederung and Grosses Werder. In 1939 it was occupied by German troops and incorporated into Germany.

After the second world war the state became again a part of Poland.

The oldest seal of Gdansk dates from the 13th century and only showed St. Mary. The seal read Sigillu antique civitatis Gdasz. On a seal known since 1299 the town is called Danzikh, and the seal shows a Kogge (typical ship of the Hanseatic League). Again a later seal, from the middle of the 14th century, shows St. Catherine, standing over a tyrant.

The crosses first appear on a small seal from 1402. The crosses are not separate, but joined together. The first Polish seal, from the end of the 15th century, shows St. Bartholomeus, not the crosses. At the same time two small seals are used, which still show the ship. On one of these a small shield with the two crosses is seen. From around 1460 the crosses are present on most seals. Ever since the crosses have been part of the arms of the city.

The crown was added in 1457. Immediately the city had a new seal made with the new arms. On this, the arms were also held by two supporting lions. These, however, were not officially granted. Ever since the city and the states have used the arms with the lions as supporters. After the city became part of Prussia, the seals showed the arms with the Prussian eagle placed above it.