From Heraldry of the World
Your site history : København
Jump to navigation Jump to search 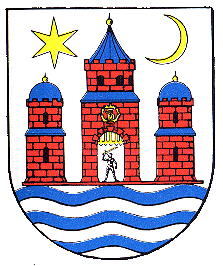 The arms are based on the oldest seal of the city, known since 1254.

The original seal showed a city wall with towers, which gradually was transformed in the three towers. The present arms were officially granted in 1661 by King Frederik III, whose monogram is seen on the middle tower. In addition to the shield itself, the arms showed three helmets, two lions as supporters and many other symbols around the shield (see below). These are no longer used.

The arms on collector's items: