From Heraldry of the World
Your site history : Sint-Denijs-Westrem
Jump to navigation Jump to search 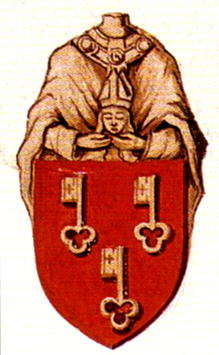 The arms were officially granted on January 5, 1925.

The arms show the three keys of the St. Pieters Abbey in Gent, to which the village belonged from around 900 to the 18th century. The supporter is St. Dionysius (Sint Denijs), the local patron saint.