From Heraldry of the World
Your site history : Buchen (kreis)
Jump to navigation Jump to search 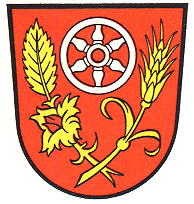 The wheel is derived from the arms of the State of Mainz, to which the largest part of the district belonged prior to 1803. The lower part shows a canting beech (Buche) branch, symbolising the Odenwald forests, and a wheatear as a symbol for the agricultural character of the district.