From Heraldry of the World
Your site history : Mühlheim an der Donau
Jump to navigation Jump to search 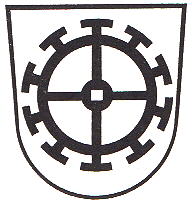 Mühlheim became a city in the early 13th century, after being founded by the Counts of Zollern. The oldest seal of the city dates from 1266 and shows the canting wheel (Mühl=mill). Even though the city was ruled by a number of families and institutions, the arms never changed. The present colours are the colours of the Counts of Zollern.