From Heraldry of the World
Your site history : Oudenaarde
Jump to navigation Jump to search 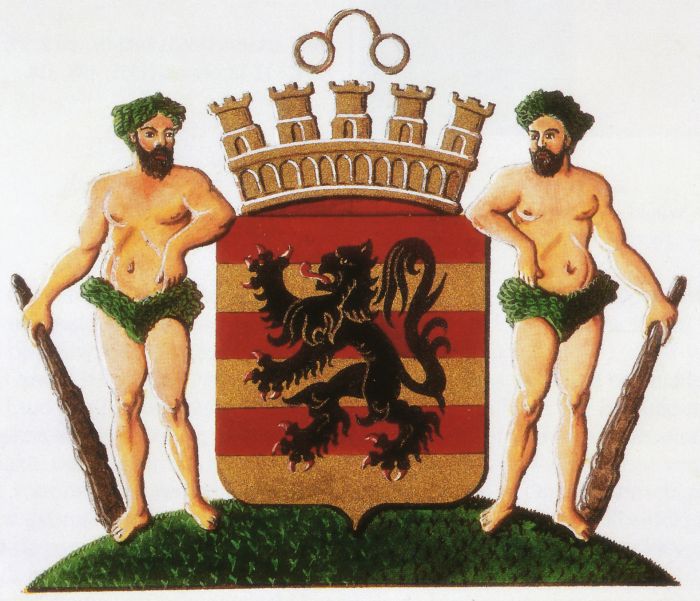 The arms of Oudenaarde first appear on the seal of the city dating from 1339. The arms are a combination of the oldest arms of the Looz family and the lion of Vlaanderen. Gerard, Lord of Oudenaarde in the early 14th century descended from the Looz family. The city was one of the main cities in Vlaanderen and had received city rights in 1190. Hence the use of the lion of Vlaanderen in the arms.

The colours are known from around 1500, with the lion completely black. During the centuries the arms have been barred of red and gold, or gold and red, and the lion has been fully black, or armed of red or silver. In 1819 the arms were granted based on the oldest coloured image, but with a red tongue. In 1992 the lion also got red nails.

The basic design of the arms never changed during the centuries, but the arms have been shown with a variety of crowns and supporters. On the old seals the arms are hanging on a tree, or have two dragons as supporters. The present savages were appear in the late 18th century, at the same time, but not on the same seal, as the glasses above the shield.

The meaning of the glasses above the arms is not known, it has been speculated that these have been granted by Emperor Charles V in the early 16th century. Another explanation is that the glasses were originally a letter A on the seal (from Audenaaerde). Both theories have not been proven and the origin, or meaning, thus remain unknown.

The present crown, a mural crown, was added in 1992 to indicate that the town used to have fortifications, this crown, however, never appeared on historical seals or images.