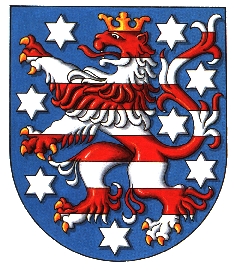 The present arms were officially granted on January 31, 1991.

The stars and the present 8 bars represent the former states, which now form the State of Thüringen:
Sachsen-Weimar(-Eisenach),Sachsen-Gotha, Sachsen-Meiningen, Sachsen-Altenburg, Schwarzburg-Rudolstadt, Schwarzburg-Sonderhausen, Reuss and parts of Preussen (not represented by a star in the arms from 1921).

In 1933 the arms were replaced by the arms below. The escutcheon shows the lion of Thüringen, holding a swastika. The four quarters symbolise the former (medieval) territories in the area : the first quarter represents Sachsen and the later smaller states derived thereof, the second quarter shows the eagle of Schwarzburg (also mentioned as the eagle of Preussen), the third the lion of Reuss. The fourth quarter shows the arms of the county of Henneberg.

In 1945 the arms were replaced again. The new arms (se below) show the lion of Thüringen, combined with the now 8 stars (one added for Preussen) of the arms of 1921. The arms remained in use until 1952, when the State of Thüringen was abolished.

Only after 1989 the old arms were restored.