From Heraldry of the World
Your site history : Trennfurt
Jump to navigation Jump to search 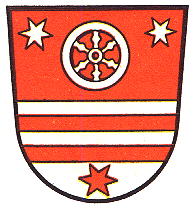 The stars are the symbol of St. Mary Magdalena, patron saint of the local church. The red bars in silver are derived from the arms of the Reitze von Breuberg family, Lords of the village in the 13th-15th century. The whole area belonged to the State of Mainz from 1438-1803, which is symbolised by the wheel of Mainz.