From Heraldry of the World
Your site history : Wagshurst
Jump to navigation Jump to search 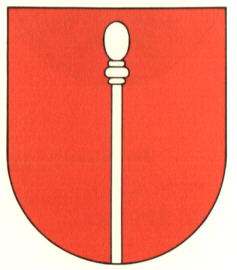 The arms were proposed and adopted in 1913.

The staff is taken from the seal of the village dating from 1811. The meaning of the staff is not known. It has been mentioned that it symbolises the power of the local council, similar to a sceptre for royalty.